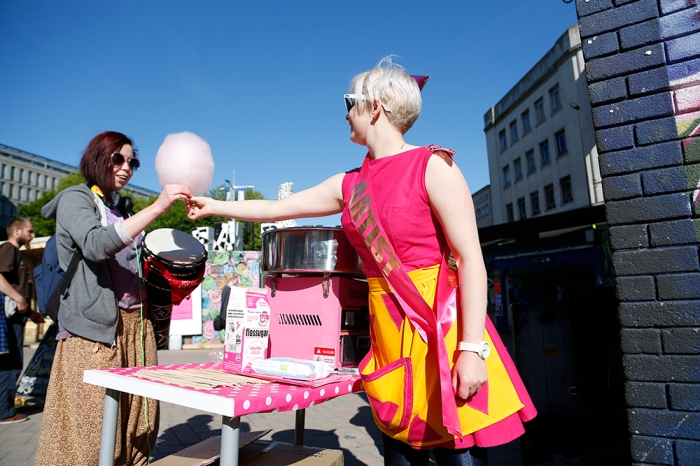 At five o’clock on a Wednesday afternoon in June, the temporary occupants of Bearpit – the underpass at Bristol’s St. James Barton Roundabout – are enjoying An Everyday Party. The purposeful stomp of the time-pressured commuter has been disrupted by balloons, candyfloss, and cake; artist Megan Clark-Bagnall handed out bags of ingredients during the morning rush-hour, with the promise that if sufficient supplies were returned in the afternoon she would bake. That commuters returned with more than enough ingredients for two cakes is testament to the power of Clark-Bagnall’s idea: the commute is dead time between work and home, and she wants to liven it up. Commuters’ familiar head-down, scrolling-through-antisocial-media march has been halted by this most affable host, whose performance participatory events always raise a smile. Just don’t forget to brush your teeth after all that sugar.

“Commuters returned with more than enough ingredients for two cakes…”

Bearpit, like so many transitional locations whose temporary population arrives daily with the express intention of leaving had, until recently, endured a decades-long fall into disrepair, while gaining a baseless reputation as a no-go area after dark. In 2010 the Bristol Civic Society united with local community action groups with the intention of redefining Bearpit as a destination. The introduction of independent traders such as the Burrito Bus, the Bearpit Social coffee shop, and ingeniously titled greengrocer’s, Bear Fruit, has served to turn a once circumvented, or at best hurried-through underpass into a gathering place for Bristolians on their way into and out of the city. It is in this spirit that South-West artist and curatorial collective Hand in Glove have undertaken Art in Bearpit, a six month programme of events and commissions occupying this incongruously peaceful spot in the centre of one of the busiest roundabouts in the Bristol. 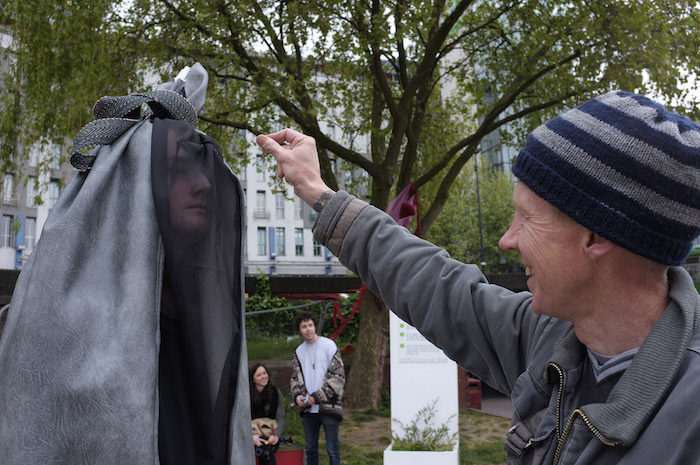 “Onlookers approached nervously to get a closer look, or skipped into a quicker pace while giving the figures a wide berth.”

The programme opened in May, with Vickie Fear’s The Keepers leaving passers-by amused and bemused as her static figures, draped head to toe in a hand-crafted coverall fashioned from textile offcuts and printed vinyl, held their positions for several hours. Onlookers approached nervously to get a closer look, or skipped into a quicker pace while giving the figures a wide berth, such is the polarising effect of Fear’s stage-managed inertia. Occupying uneasy territory between sculpture and performance, with figures caught between person and object, these politically charged obfuscations gave viewers a reason to pause and take note in a place they would usually pass through on their way in to town. Amid the flurry of Saturday shoppers and teenagers hanging-out, The Keepers are ever-present, quietly imposing themselves into your peripheral vision.

Black and yellow – nature’s attention-hogging warning colours (far from quietly imposing), adopted by health and safety regulators the world over – are the colours of Philip Cheater’s Pavilion, a visually striking sculpture with multiple uses: rentable event space; meeting place; shelter. Its hexagonal structure invokes park bandstands, but unlike those often locked-down Victorian stages, Pavilion is open on three sides and is as accessible to the public as the park-benches and stairways that surround Bearpit’s main plaza. Pavilion, though presented in an art context, should not be considered an artwork that changes how one sees the world (though it yet may do so), or that reveals some hidden mystery about one’s own psyche, but as a social project that happens to have been designed by artist. Present for the duration of the programme, we will doubtless learn more of its purpose throughout the summer. 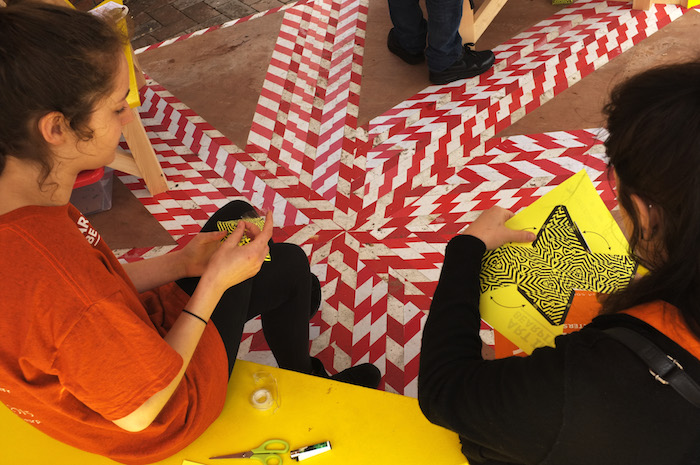 Art in Bearpit, although organised by artists and curators, is not about artists exhibiting artworks that other artists will come and see; there are enough of these exhibitions across the city every weekend already. It is a project that puts artists and their ideas out into the world without the safety net of a clean, white gallery space. The projects that have been realised here thus far have been reliant on the everyday public of Bearpit for their completion, and as such are united in their vulnerability. Vickie Fear’s sculptural performers stood still, with a very narrow field of vision, alone in the crowd on a busy Saturday afternoon. Philip Cheater’s Pavilion, despite its warning colours, is defenceless against vandalism as it occupies the space day and night. And Megan Clark-Bagnall’s Everyday Party went out on a limb in the hope that commuters would be up for a dance after who knows what kind of day they’d had. The next event for Art in Bearpit is perhaps the most vulnerable yet, as artist-duo A-Peg stage a sleep-in under the stars. Pillows will be handed out but bring a sleeping bag and a flask of something hot to keep you going as conversations are sure to stretch into the night between participants and those ever-present passers-by…