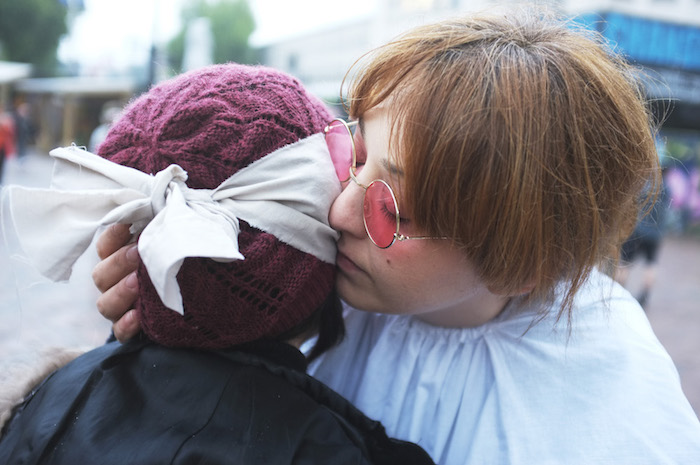 A small crowd convenes in the centre of Bearpit: its members are asked to raise a tot of gin to toast the evening ahead. Artist duo A-peg – Eva Martino and Hannah Clark – invited members of the public to join them for The Cloud; a night beneath the stars in what was once one of Bristol’s most notorious no-go areas. The evening begins with a series of activities; from answering questions such as ‘How comfortable are you talking to people you don’t know?’, and ‘How safe do you feel right now?’, to being blindfolded and shuffled to various locations within Bearpit, placed opposite a stranger, and being hugged by one or both members of A-Peg.

As the sun dipped between the surrounding towerblocks, casting long shadows into the space, the crowd reconvened by Philip Cheater’s Pavilion to hear a spoken word duologue, the content of which had been gathered a month earlier. Many of Bearpit’s least-heard voices were aired through this piece, and as the steady hum of the traffic began to die down, A-peg’s touching speeches echoed across the plaza.

“Nothing else engaged its community on the same level as The Cloud – its visceral, emotional reach resonating with artists and participants long after the event.”

Participants that intended to stay the night were offered to take from a mountain of white pillows – the cloud that gave the work its title – before settling down for a little more gin, or tea and coffee, and a goody bag whose contents included a flapjack and a torch. An evening of animated discussion, very light sleeping, some laughter, and the occasional scuffle followed. In the morning hot drinks and chewing gum were handed out to anyone that had made it through the night. Nothing else in the Art in Bearpit programme engaged its community on the same level as The Cloud – its visceral, emotional reach resonating with artists and participants long after the event.

For Subterranean, Polly Kelsall placed 100 artificial molehills around Bearpit, having fashioned them from earth removed over several days from an undisclosed location. This act of migration and subversion would perhaps, if made public by the artist, have chimed more effectively with the location’s uses and occupants than the absent ‘ruptures in the fabric of Bearpit’ that the supporting text promised. Nevertheless, the molehills attracted a good deal of attention; people stood over them, camera-phones in hand, puzzled by their appearance in this unlikely environment. The more conspicuously-positioned mounds soon collected bicycle tracks and footprints, and some were altogether destroyed. As they began to break down and return to the earth, Subterranean provided a satisfying circularity.

In contrast to Kelsall’s quiet intervention, Kypros Kyprianou approached passers-by directly, one at a time, offering them ‘Daily Fear’ or a ‘Security Update’. In a broadsheet newspaper format, Kyprianou’s The Daily Record informed readers that ‘If you have nothing to hide you have nothing to fear’. The remaining space on the document contained greyed-out columns in place of text, through which two eyeholes had been cut. It’s an old joke; the shifty reader spying on the world through his newspaper, but it raises plenty of laughs when employed against the surveillance culture that may be the abiding legacy of the US-led ‘wars on terror’, waged in the wake of 9-11.

“A man looks to the sky, ‘My face is on record. How many cameras are pointed at me right now? I’ve done nothing wrong.’”

Passers-by largely gave a wide berth to the artist dressed in black touting his paper from a fold-out table, but of the Bearpit commuters that stopped to take a copy, a good number of them stuck around to talk about it. Discussions develop around a state of acceptance, especially among the under-20s who have been brought up under surveillance, and have so readily turned their own recording devices on themselves – ‘as a response?’ one lady proposes. A man looks to the sky, ‘My face is on record. How many cameras are pointed at me right now? I’ve done nothing wrong.’

There are doubters, too. A young woman walks away shouting ‘What’s the point in a paper without any words?’ before discovering the eyeholes, through which she spends the following twenty minutes navigating Bearpit. And everyone’s jaw hits the floor when one man returns his paper while telling us that we are freer now than we have ever been.

The Daily Record also sparks discussions around digital security: data storage, location tracking, and the phone-hacking scandals of recent years. Our answer, like Kypros’ to his commuting customers, is to smile for the camera, to turn our own devices on ourselves and track our own movements: reclaiming symbolic autonomy when to be angered by something one is powerless to change feels futile.

Kypros’s use of the line, often quoted by supporters of increased surveillance, ‘If you have nothing to hide you have nothing to fear’ is a pertinent satirical tool in Bearpit, whose occupants are watched over day and night by lamppost-mounted security cameras, but where alcohol and drug use, as well as physical intimidation remain a daily occurrence. We live in a paradoxical world where privacy is guaranteed by increasingly intrusive levels of surveillance, but the use of CCTV appears largely retrospective; their daily failure as a deterrent and inability to intervene at the crucial moment are testament to that, and in six months of Art in Bearpit events I have yet to witness a physical police presence. Indeed, as A-peg will testify, it took The Cloud to justify round-the-clock security. After the artist duo attended the requisite number of council meetings and completed the relevant paperwork, it was demanded that two security guards oversee the event in which members of the creative community spent a night alongside rough-sleepers – some drunk, some taking drugs. This requirement amounts to tacit civic acknowledgment of the way in which the lives of the ‘general public’ are prioritised over those of the homeless, the disempowered and the disenfranchised.